Is your recycling facility equipped to deal with increasing LCD/ FPD waste?

In 2017, the amount of electronic and electrical waste produced by humans was truly staggering – 44 million tonnes, to be exact, as reported by the United Nations. To comprehend the sheer magnitude of this figure, it is the equivalent of 9 million elephants, 220,000 blue whales, or 6,000 Eiffel Towers. This figure is a sobering indication of the magnitude of the environmental consequences of human activity.

In this article, we will answer some of the most important questions connected to our main topic: Is your recycling facility equipped to deal with increasing LCD/ FPD waste?

We will also take a close look at the statistics related to e-waste, hoping that they will give a good indication of why it is so important to advance the technology of the recycling plant as soon as possible.

How much e-waste is on Earth?

Geneva’s Internet Platform, digwatch, reminds us that the global demand for electronic devices is on the rise and so is the number of used and discarded gadgets. We are generating around 50 million tonnes of e-waste every year, which is more than the weight of all of the commercial airplanes ever made! Digwatch says that if nothing changes the annual amount of e-waste could more than double by 2050. It’s just an estimate and a prediction, but how scary is that? If you are curious about how many Tons of e-waste was already thrown out worldwide, visit https://www.theworldcounts.com/challenges/waste/electronic-waste-facts and see by yourself. The clock is ticking…

According to the Roundup group, these latest research, facts, and statistics clearly show how dramatic the scale and consequences of the global e-waste problem are: 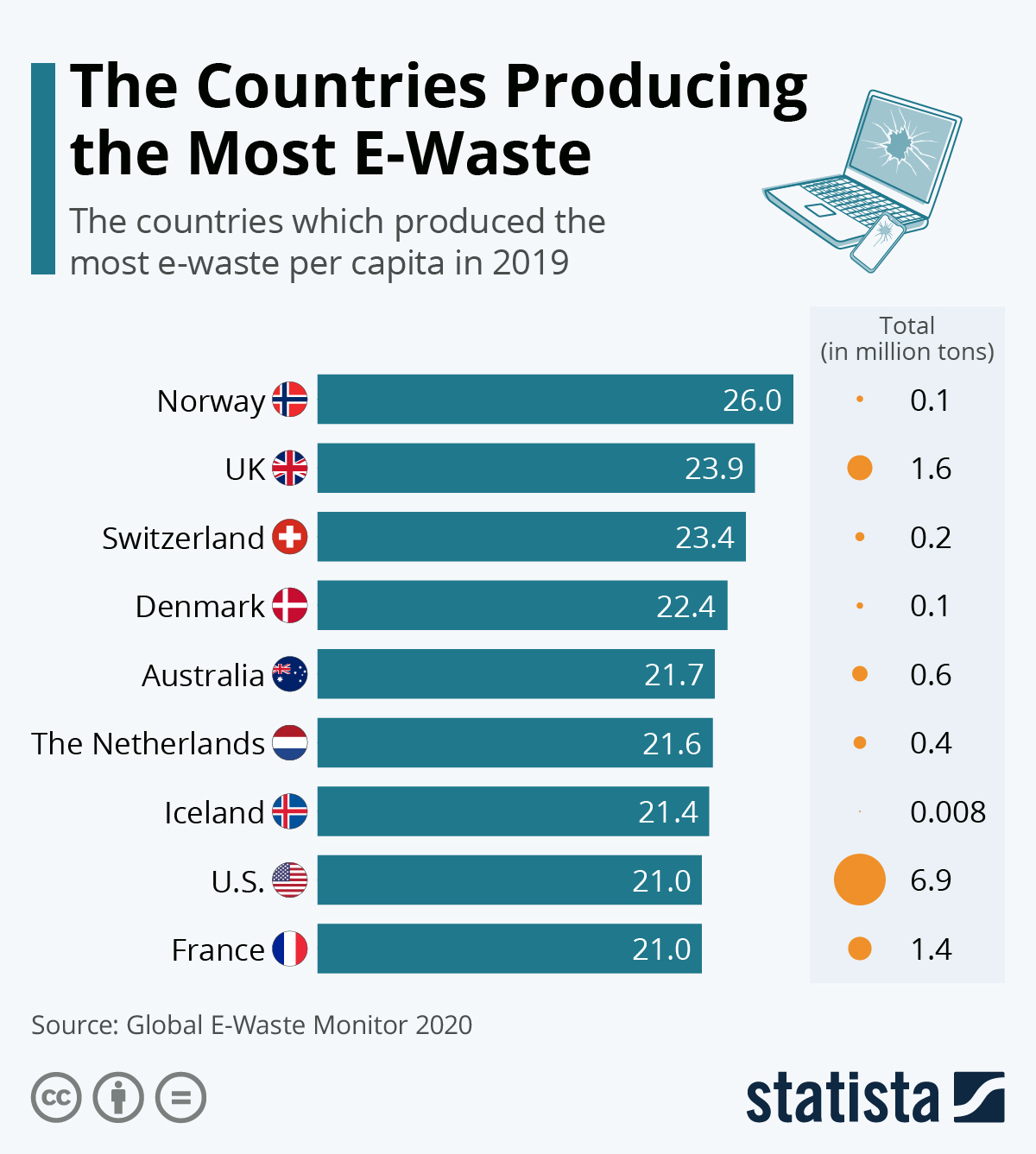 Chart: The Countries Producing the Most E-Waste | Source: Statista

How much e-waste is produced each year?

E-waste data started being collected only in 2014… since then the increase in the amount of electronic waste being produced year after year is shocking. Until the end of 2022, there will have been an estimated total of 420.3 Million Metric Tonnes of e-waste produced. Based on this data we can easily estimate that at least 347 Mt of e-waste remains. See the graph below for reference.

What are the reasons for such a situation?

How long does it take for e-waste to decompose?

The answer is largely dependent on the type of material the e-waste is composed of and how long it is exposed to external conditions, such as temperature and humidity. In fact, it can take 1-2 million years for glass components and 1 million years for plastic components! Metals can take 10 to 100 times longer. Due to their long-life cycles, e-waste can significantly contribute to the build-up of waste in landfills and the environment. The table created by Science Learning Hub shows how long some common items will take to break down if left in the environment:

Lisa O’Donoghue, Votechnik’s CEO, one of a number of Irish SMEs awarded European Innovation Council funding, successfully submitted a research proposal to the Environmental Protection Agency, and led a multi-disciplinary team in the university, which included automation engineers and process engineers, to investigate an automated process for recycling LCDs. Dealing with the problem of disposing of hazardous LCDs and fluorescent tubes safely and responsibly, the team devised a machine utilizing a robotic process to recycle the LCDs contained in TV screens in a way that meets the strict standards of the EU Waste Electrical and Electronic Equipment (WEEE) regulations. This machine is both secure and effective in its approach > https://votechnik.com/alr4000/

Is your recycling facility equipped to deal with increasing LCD/ FPD waste?

The answer to this question will depend on the specific recycling facility in question. Most modern recycling facilities are equipped to handle LCD/FPD waste, but so many don’t. The majority of recycling centers rely on people’s power rather than robotics; current manual methods are time-consuming and costly. Recyclers use either manual disassembly or semi-automated processes to cut open the LCD, and the manual labour has to go in and pick out the hazardous materials. When compared with the manual process of three or four per hour, the ALR 4000 is significantly faster with a rate of approximately 60 LCDs per hour.=

they are using very old recycling plants and shredders while asking their employees to break down the LCD/FPD waste into smaller pieces.

The U.S. Environmental Protection Agency has stated that e-waste is dangerous when improperly disposed of, and they are not the only ones to say so. Many organizations around the world are talking about the importance of recycling e-waste for the right cause. Votechnik also consistently educates our readers and social media followers about this risk, pointing out that your investment in the latest recycling facilities can be worth its weight in gold! When these electronic devices are properly recycled, the valuable materials are sold at a profit and turned into something new.

International organisations and other stakeholders are increasingly discussing e-waste in the context of the ‘circular economy concept, as opposed to the prevailing ‘take-make-dispose’ economic model.

With the value of e-waste at least $62.5 billion a year, exceeding the GDP of most countries, the economic benefits of switching to a circular economy model in the electronics sector are enormous. Some precious metals, such as gold, are more concentrated in e-waste than in the most productive mines, and in addition to the immediate economic benefits, recovering these valuable resources could lead to lower costs of electronic goods for consumers.

Applying the circular economy can also generate millions of jobs around the world. Appropriate infrastructure, regulations, and policies can create many good jobs in the area of ​​e-waste management, which in turn would accelerate the implementation of the 2030 Agenda for Sustainable Development, especially in the areas of decent work, economic growth, responsible production, and consumption.