The Circular Economy is a concept based on eliminating waste, recycling and reusing resources. It is a systematic approach to economic development that tries to maintain materials in circulation for as long as possible while assuring economic growth and development.

The Circular Economy has grown more popular in Europe as a strategy to lessen the environmental effect of commercial activities and better use of materials. The European Union (EU) has accepted the concept and created its Circular Economy plan. Many European nations have adopted the plan as part of their environmental and economic policies.

What is a Circular Economy?

The goal of the Circular Economy is a more efficient and responsible use of materials and energy. Renewable energy, efficient consumption, and green transportation are all essential tenets of this approach, founded on the three Rs: reduce, reuse, and recycle.

As part of its mission to foster a more sustainable economic system, the Circular Economy has advocated for companies to lessen their negative effects on the environment and the community by improving their operations’ effectiveness. Applying the Circular Economy principles in Europe would have many positive effects. Production costs, job creation, and environmental pollution are all areas that can benefit from a well-executed Circular Economy.

It can increase economic growth and development by lowering electronic waste and generating new business opportunities. The Circular Economy can also lessen the toll that production processes take on the economy and the environment and help distribute materials more fairly. 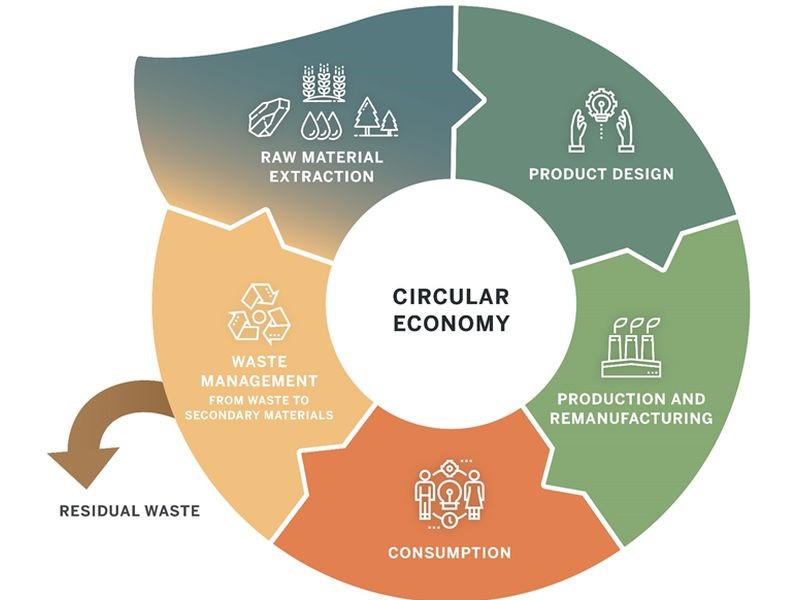 Overview of Circular Economy in Europe

In 2015, the European Union (EU) enacted its Circular Economy Strategy, making it a pioneer in creating a sustainable economy. The plan aims to green the economy, create jobs, and reduce electronic waste and resource inefficiency.

Several projects have been launched in European nations to advance the circular economy. E-waste recycling programs, electronic recycling laws, and other waste reduction measures for electrical and electronic equipment (EEE) are all examples. Furthermore, numerous nations have incentivized firms to embrace sustainable practices, such as the European Green Deal.

Germany, France, Italy, and the Netherlands are front runners in the European countries that have embraced this method.

In Germany, the Recycling and Waste Management Act has been in effect since 2011. It is being used to implement the Circular Economy. In addition to offering incentives for reducing commercial and residential waste, this legislation also promotes the reuse of resources and the efficiency of energy consumption and transportation. Various laws have been passed in this nation to facilitate the recycling and reuse of LCD monitors, electronic products, and other electrical and electronic equipment.

In France, the Eco-design Directive plays a significant role in the country’s overall Circular Economy policy. The directive stresses minimizing waste and making the most of available resources. The nation has also instituted many rules to promote the recycling of electronic waste and to lessen the amount of trash produced.

In Italy, several programs, such as the National Plan for the Reduction of Waste and the Promotion of Recycling, aim to advance the Circular Economy. This strategy aims to cut down on trash while simultaneously encouraging recycling and reusing of materials. In addition, several programs have been launched to encourage the recycling of LCD screens and LCD panels, the reuse of electronics, and the reduction of the country’s overall energy and material consumption.

In the Netherlands, the Sustainable Materials Management Act is putting the Circular Economy into action by reducing electronic waste, boosting manufacturing efficiency, and opening new markets. The government has also launched various programs to encourage citizens to reduce waste by reusing and recycling goods and reducing energy use.

Many European companies now operate using circular economy methods. For example, Some electronics manufacturer, for instance, creates new LCD panels from repurposed LCD screens from older televisions and monitors. Another firm salvages and repurposes computer monitors and other flat screens for use in new products. These companies are only a sampling of those who have adopted circular economy practices across Europe.

Although there is growing support for the circular economy in Europe, there are still several challenges to its implementation. One of the main challenges is the need for appropriate infrastructure. This obstacle includes a need for recycling facilities and a need for incentives for businesses to adopt sustainable practices. Additionally, a lack of education and awareness about the circular economy makes it difficult to engage businesses and the public. Finally, policy gaps hinder the implementation of the circular economy in Europe, such as inconsistent regulations across countries.

Challenges remain’ for the circular economy in Europe | Resource.co

The notion of a “circular economy” has been widely adopted across Europe, from the European Union to individual member states. Its goals include improving economic possibilities and lowering environmental consequences while decreasing electronic waste and increasing resource efficiency.

The Circular Economy is being implemented through several initiatives, such as the Recycling and Waste Management Act in Germany, the Eco-design Directive in France, and the Sustainable Materials Management Act in the Netherlands. By adopting the Circular Economy, European countries can reduce their environmental impact, increase the efficiency of their operations, and create a more sustainable economy.

Europe has taken several initiatives to promote the circular economy, and several businesses in Europe are practicing it. However, its implementation still has several challenges, including infrastructure, education, and policy gaps.